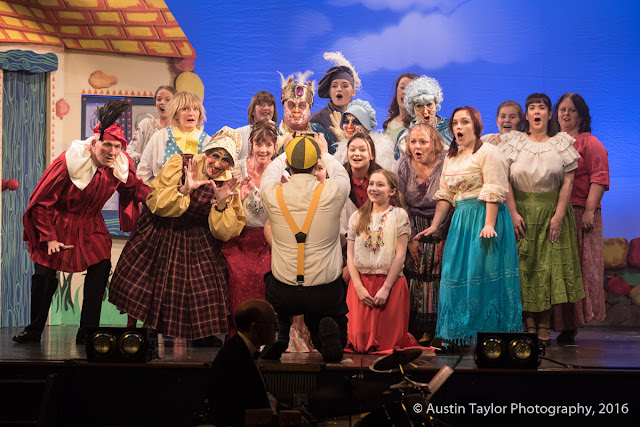 16 December 2016
The annual pantomime in the Garrison Theatre is an honourably long-established part of the Shetland calendar; and a favourite part of the Christmas season for many people, especially bairns. Nothing else in Shetland today can match pantomime audience figures. This winter, Islesburgh Drama Group presented its thirty-first pantomime, Mother Goose, and as usual, it was a ten-night sell-out.

Islesburgh had performed Mother Goose twice before, in 1973 and 1990. The programme featured photos of both previous casts: interesting to compare.  The script, of course, has noticeably moved with the times – 'twitter' and 'strictly', for example, have acquired other meanings over the years!

In panto, action is often exaggerated, and dialogue full of wisecracks, word play, and puns. Up-to-date local references will be added to the script. Lead characters lead with gusto. Villains must be – and look – dastardly. High standards of costume, lighting and special effects are expected. Interaction with the audience – as loud as possible –  is compulsory. In all these respects, Mother Goose certainly fitted the bill (oops, sorry...!).

The role of pantomime dame is critically important. It is a role for a seasoned performer with great physical movement and facial expression: one who can carry the stage and the auditorium, and simply give it laldy. And George Webster was in top form as Mother Goose. Clad at first in homely pinafore and a certain style of hat, he progressed through glittery pink flounces to slinky black and gold – and back to the pinafore – with great verve and energy, and an amazing collection of jokes about bras. (Anyone who didn't see the pantomime this year really ought to ask around and find out what the difference is between the Mareel bra and the Garrison bra!) 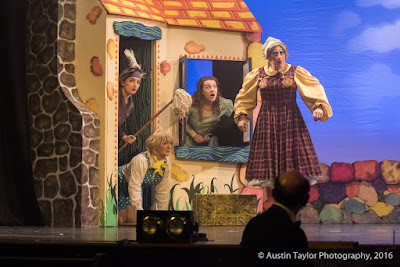 A strong group of lead actors backed up the dame. Lyn Anderson, principal boy Colin, has a great singing voice and a real stage presence, while Zoe Spence's Jill came across as a stronger character than some other principal girl roles achieve. Stephanie Pagulayan, as Silly Billy, interacted the most with the audience, and played with effortless charm and enthusiasm. The Demoness Discontent was a malevolent vision in red, played in great style by Donna-Marie Leask, with an absolutely text-book evil chuckle. In contrast, Priscilla the Goose, portrayed by a beautifully shaped and feathered Cara Leask, was plain delightful, as was her make-up. Her charm came across almost entirely through movement, as Priscilla apparently could not speak, only quack, which she did most effectively. As both her parents spoke fluent English, this monoglot quacking was a bit of a mystery, though it must be said that her mother, Queen Goosegog (Morag Mouat) made unusual alterations to the English language quite regularly!

Priscilla, of course, lays the golden eggs which save Mother Goose – and her friends and neighbours – from eviction from Goosingham, their lovely nursery rhyme-style village (a very attractive set). However, riches make the dame greedy and discontented, and she sets off on a quest for restoration of her youth and beauty. Lighting greatly enhanced the scene changes on her travels, particularly at the beautiful blue-lit Magic Pool. (Sound effects were good too: for example, the Pool water level was out of sight but the sound of the dame's splash dive was entirely realistic!)  Mother Goose does become more beautiful, but she remains in the Land of Discontent. Her family miss her, and are unhappy too. The spell is only broken when Mother Goose starts to wish for the days with her family, before she became rich. But first, Priscilla makes a trip home to Gooseland. This scene was particularly memorable. The lighting had an soft, ethereal quality, there was a great song ('Anything can happen if you let it'), and the chorus was at its best. 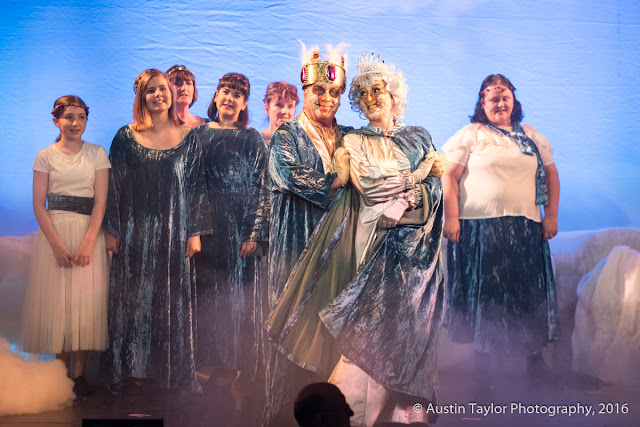 Audience participation may vary a little from show to show - but probably not a lot! On Monday evening, once the newcomers to panto in the audience understood what was expected, interaction was enthusiastic. Under strong direction from Silly Billy, and roused by the action on stage, the crowd reacted with glee. The chase around the auditorium was particularly effective, and roused the bairns to a pitch of excitement, while towards the end, the singing of  'Never say Boo to a Goose' rose to a fair old crescendo.

All in all, Mother Goose was a satisfying classic pantomime, and provided a great night's entertainment. All praise to director Jennie Atkinson and her whole team. The hard work and commitment of everyone involved – the cast, the musicians and all those behind the scenes – was as clear as the obvious enjoyment of the audience.

Producing and appearing in the Calendar was a totally new venture for all of us but something which we are so glad we did! Here are some Behind the Scenes photographs of what was a few very memorable days back in February.  We gathered first at Islesburgh House one very windy Saturday morning at 11am. It took quite a while to get all the props into the building and upstairs. Only four photographs were being taken that day, but there were many props! Karen Erasmuson our Props Manager on stage had worked tirelessly collecting props for all the photographs and on the day was helped in the setting up by Val Hall, Fiona Smith, Cheryl Cluness, Donna Simpson and Martin Summers. Our photographer was the wonderful Sophie Whitehead and she put us all at ease with her wonderfully relaxed style. As in the play, the photographs were set up with us wearing our dressing gowns, then everyone but Sophie and Karen left the room, when we disrobed and the photographs were taken. First up was Morag Mouat 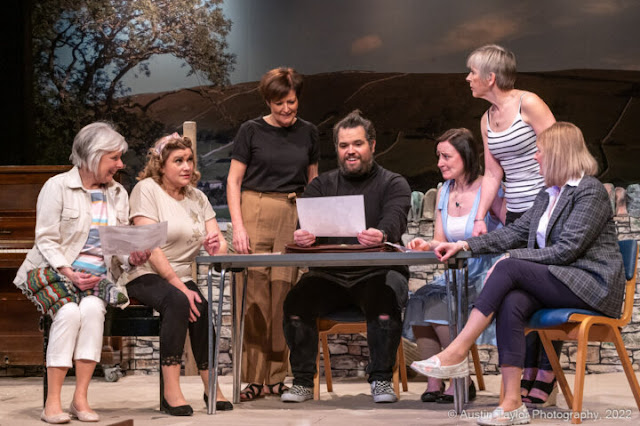 Calendar Girls : Behind the Scenes : Costumes and Props

Calendar Girls was a costume heavy play and for most of us a new experience wearing modern clothes on the stage. None of us like wearing our own clothes as it is difficult to create a character wearing something you would normally wear so we spent many weeks in the local charity shops and also swopping clothes between ourselves. In Act 1 there were six scenes, only two of which ran in to each other, so there were five changes. In some cases it was a change of season, so a complete costume,  sometimes just the passing of a day, adding say a scarf or a jacket, but there was a change. In Act 2 there were four or five changes depending on the character. The only costumes in the Ladies Dressing Room were those we wore at the beginning of each Act...... ...... along with the Nasa Satellite Dish (Marie's monumental hat !!!) Many changes had to be made in a page (or sometimes less) of dialogue so we had racks in the wings. Stage left was Cora (Jacky Williamson), Chris (Morag Mouat), Ruth ( 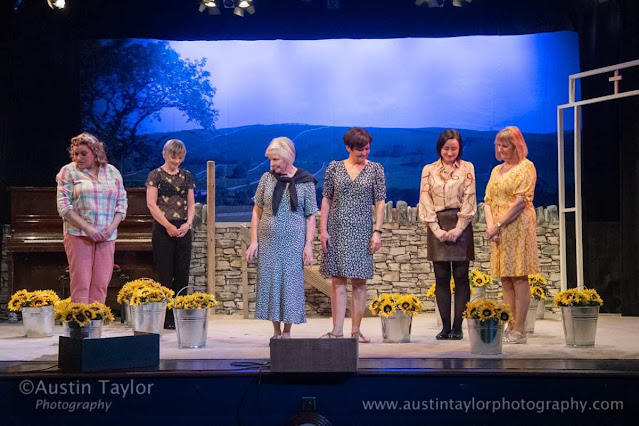 Calendar Girls : Behind the Scenes : Sunflowers

Sunflowers (their seeds and their flowers) played a very important role in the play.  They were John's favourite flower: I don't think there's anything on this planet that more trumpets life than the sunflower. For me that's because of the reason behind its name. Not because it looks like the sun. Because it follows the sun. During the course of the day the head tracks the journey of the sun across the sky. A satellite dish for sunshine. Wherever light is, no matter how weak, these flowers will find it. Which is such an admirable thing. And such a lesson in life. (John) The flowers were also seen as a gift of hope from the Drama Group in these challenging times and so every night a single sunflower was put on each seat in the Garrison Theatre for everyone to take home along with the message of hope in the form of John's words.  We are indebted to Ocean Kinetics who sponsored the sunflowers used both in the play and in the Theatre. Each evening before the performance